April 23, 2019
Hello friends welcome to my blog .today I am going to say about Viva questions which are commonly asked in experiments during lab evaluation .so let's start our topic .
1.)who introduced the concept of hall effect ?
Ans.) TheHall effect was discovered in 1879 by Edwin Hall while he was working on his doctoral degree at Johns Hopkins Universityin Baltimore, Maryland.

2.)what is hall effect ?
Ans.) Hall effect is defined as "when a current carrying conductor is placed in a magnetic field which is mutually perpendicular to the direction of current,then a potential difference is produced at the right angle sides to both the magnetic and electric field ."

3.) What is hall coeffecient?
Ans.)Ans Hall coefficient is defined as "The ratio of the induced electric field to the product of the current density and the applied magnetic field."
4.) What is hall voltage ?
Ans.)the voltage produced during the process is known as hall voltage .
5.) What is the significance of hall co effecient ?
Ans.)Hallvolt a direct measure of the mobility of the carriers involved, and that its sign or polarity will change if the sign of the charges flowing changes. It is customary to define a hall coceffecient for a givenmaterial.
6.)what happens to the hall coeffecient with the increase of no.of charge carriers ?
Ans.) coeffecient is inversely proportional to the no.of.charge carriers per unit volume .so as per the above condituon with the increase in no.of charge carriers per unit volume hall.coeffecient will decrease .
7.)in semiconductors which has greater mobility ?
Ans.) In Semiconductors electron has greater mobility than holes .
8.)what is the hall angle ?
It is the angle made with the x direction by the drift velocity of charge carriers is known as hall angle .
9.) Mobility is directly proportional to the conductivity .
10.) Why is hall potential developed ?
When a current carrying conductor is placed in a transverse magnetic field the magnetic field exerts a deflection force (lorentz force ) in the direction perpendicular to both magnetic field and drift velocity this caudes changes to shift from one surface to another thus creating a potential difference .
11.) Formula for hall coeffecient and hall voltage ?
12.) What was the constant magnetic field and constant current (which you have made during the experiment )?
13. 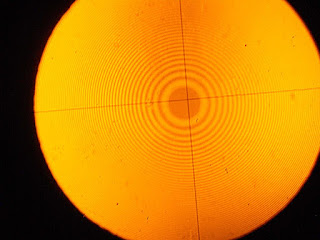